Home » Blog » PPP and another "P" - Profitability
× Share this article

April 9, 2020 Dallas Wells
Over the last few weeks, the headlines in the banking industry have been pretty easy to summarize: All PPP (Paycheck Protection Program), all the time.
Bankers have all gotten intimately familiar with the program in short order, and are now wrestling with a long list of questions to consider, including:
Each of those questions, though, should be guided by the answer to another question:
“What is the profitability of these deals?”
Let’s be clear: We’re NOT saying you need to figure out how to squeeze as much profit out of PPP. Many banks view it as their moral and fiduciary responsibility to participate to the full extent they are capable. PPP is an emergency program to get funds into the hands of as many small businesses as possible, and banks are the merely the most efficient conduit.
But a lot of deals are going to get added to banks’ books in a very short period of time. If a large number of their PPP deals are a net loss, the banks needs to know – and adjust its approach accordingly. Conversely, if the bank is in the black on its PPP deals it can reconsider its original settings for capacity, risk, etc.

The CARES Act spelled out terms that should make these favorable structures. They are 100% guaranteed, making their credit risk essentially zero. However, there is operational risk that will require some capital, and the costs of originating and servicing these loans is a giant question mark. We’ve done our best to help our clients estimate the general level of profitability, as most are unable to measure individual deals as they are being processed.

Below is an example of a $1MM loan. In this case we assumed the bank would have double their usual origination and servicing costs. 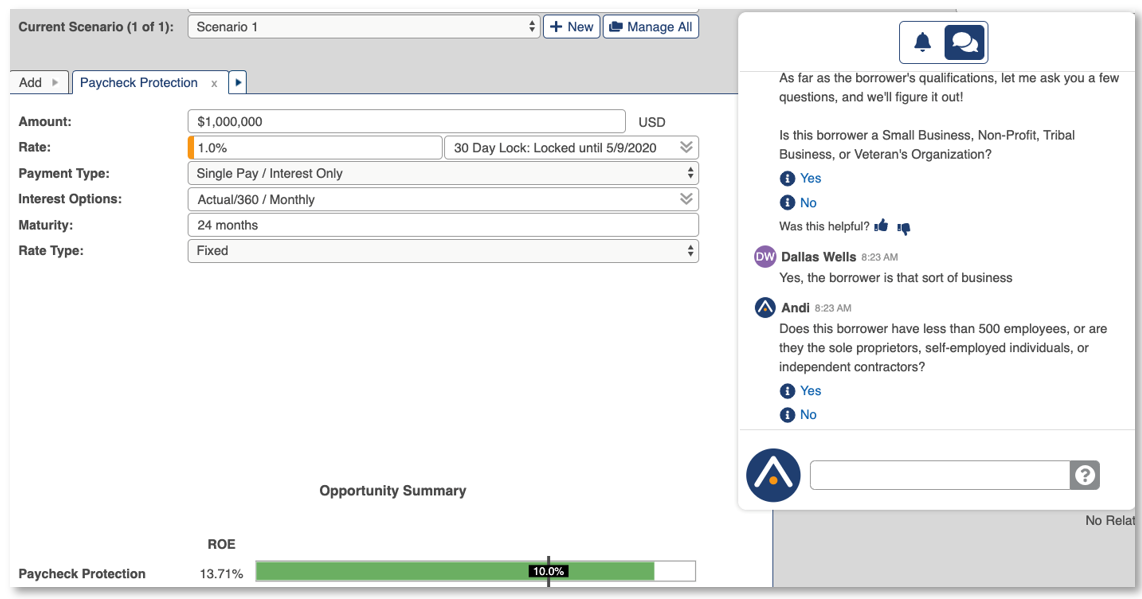 The green bar at the bottom of the screen indicates this PPP deal will get a 13.71% ROE for the bank, well above its target.

With the reimbursement the banks receive and the 100% guarantee, deals of this size are solidly profitable (13.71% ROE in this example), even when assuming a heavier operational burden.

However, most PPP loans are much smaller than this example.

In this excellent post from Chris Nichols at CenterState Bank, he shows the average loan size so far is $147,350. Below is an example at that size, again assuming double the usual expenses: 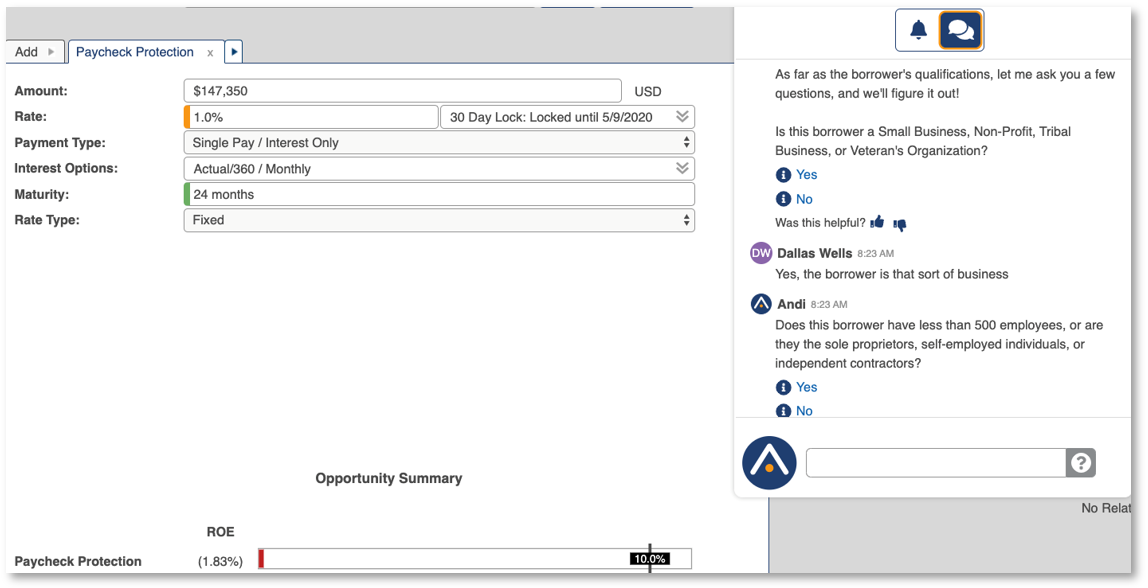 The red bar at the bottom of the screen indicates the bank is getting a negative ROE (-1.83%) on this PPP deal, well below its target.

This smaller loan loses money for the bank (1.83% ROE). It is profitable, however, if the bank has the same origination costs as it does for a typical loan of this size. As the loans get smaller, the need is even more critical. At the usual expense levels, the breakeven loan size is $76,000.

The charts below show the profitability across a range of loan sizes. On the left we look at risk adjusted return on capital (RAROC). You can see the steep losses for the smallest sizes, and a bump in the middle. This is caused by their tiered reimbursement schedule of the program – our metrics actually show the middle size to be the most profitable in terms of RAROC.

On the right we’ve charted it by risk adjusted net income. From what we are seeing with clients, the vast majority of the volume falls into the smallest size bucket. That mix is confirmed by the CenterState Bank analysis. That means that most of your effort for this program is probably losing money, or at best, breaking even.

Again, the point of PPP isn’t to enrich the banks with a profitable new loan product. However, banks should set their strategy for this program with their eyes wide open to the impact on their bottom line. They should also be aware that they need to do everything they can to wring some efficiencies out of the process.

To that end, banks MUST find ways to do these more efficiently than just gathering employees in a war room to enter applications by hand.

This is exactly why so many banks are seeking a technology solution for processing; it is the ONLY way to make these loans without losing money. The good news is that it’s possible to stand up one of these solutions in just a couple of days. Q2 has built a solution within its Cloud Lending unit  that does exactly that. With millions of PPP deals worth $349 billion expected to flow through U.S. banks in the next 90 days, it’s worth taking a little bit of time now to avoid an immense amount of pain later.

A look at what PrecisionLender data tells us about the commercial loan pricing market, for the week of Marc...