April 26, 2021 Jim Young
For the past 12 months, the only certainty in banking has been, well, uncertainty. The impact of the pandemic has been felt in countless ways. Risk profiles of entire industries have shifted. The federal government has stepped in with programs that have helped in some ways, while also creating unique challenges for banks. In addition, banks have navigated all this with a workforce and client service systems adapting on the fly to the new work-from-home world.
But banks have adjusted, sometimes better and faster than expected. And while many challenges still lie ahead in 2021, there are also opportunities.
That’s why we created this panel discussion for our March Fireside Chat, “Commercial Banking in a Time of Uncertainty,” and invited top bankers from around the country to share their views on where things stand right now in the industry.
Below is a recap of the conversations, as well as responses from our attendees to several poll questions.
Our panelists were:
The topics they covered included: 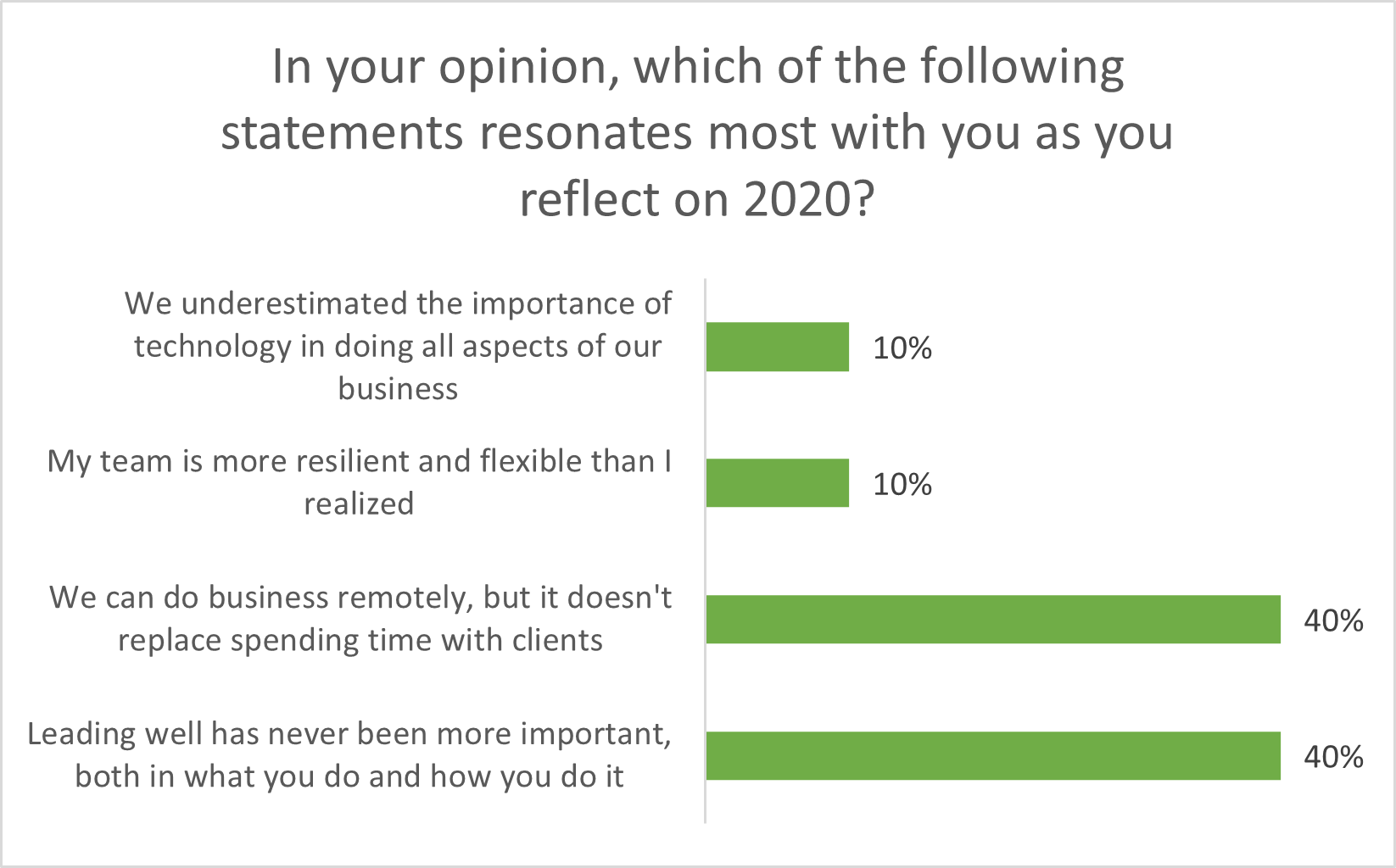 Banks were forced into a different way of operating in 2020. Now with a chance to catch their collective breath, bankers have realized that – while they’d still rather return to the days of face-to-face interactions – they were able to adjust to the sudden, dramatic shift to 100% remote.

“We observed an agility we hadn’t seen in large banks,” Scislowicz said. “Frankly, I think many banks surprised themselves in their ability to adapt, be flexible and make decisions and execute in a manner they hadn’t before.”

And sometimes executing in a different manner led to an improvement on previous pre-pandemic processes. ScotiaBank had to implement remote training for its RMs on PrecisionLender, but found this approach was much better than the previous system of bringing the bankers into a classroom for a multi-hour single-day training session.

“It actually led us to learn that you can train people much more effectively when they’re in front of their computers,” Snowden said. “They’re using the tool, and actually playing around with it as you’re delivering that training.

Still, those pleasant positive surprises came against a backdrop of constant change and the stresses of broader uncertainty. It’s a recipe, as Wells put it, for pandemic fatigue.

“With that fatigue, I think it’s really important that leaders stay focused, keep their teams focused, and, on a human level, help their folks execute on the things in front of them.”

Here's Snowden sharing some of Scotiabank's learnings from implementing PrecisionLender during the pandemic. 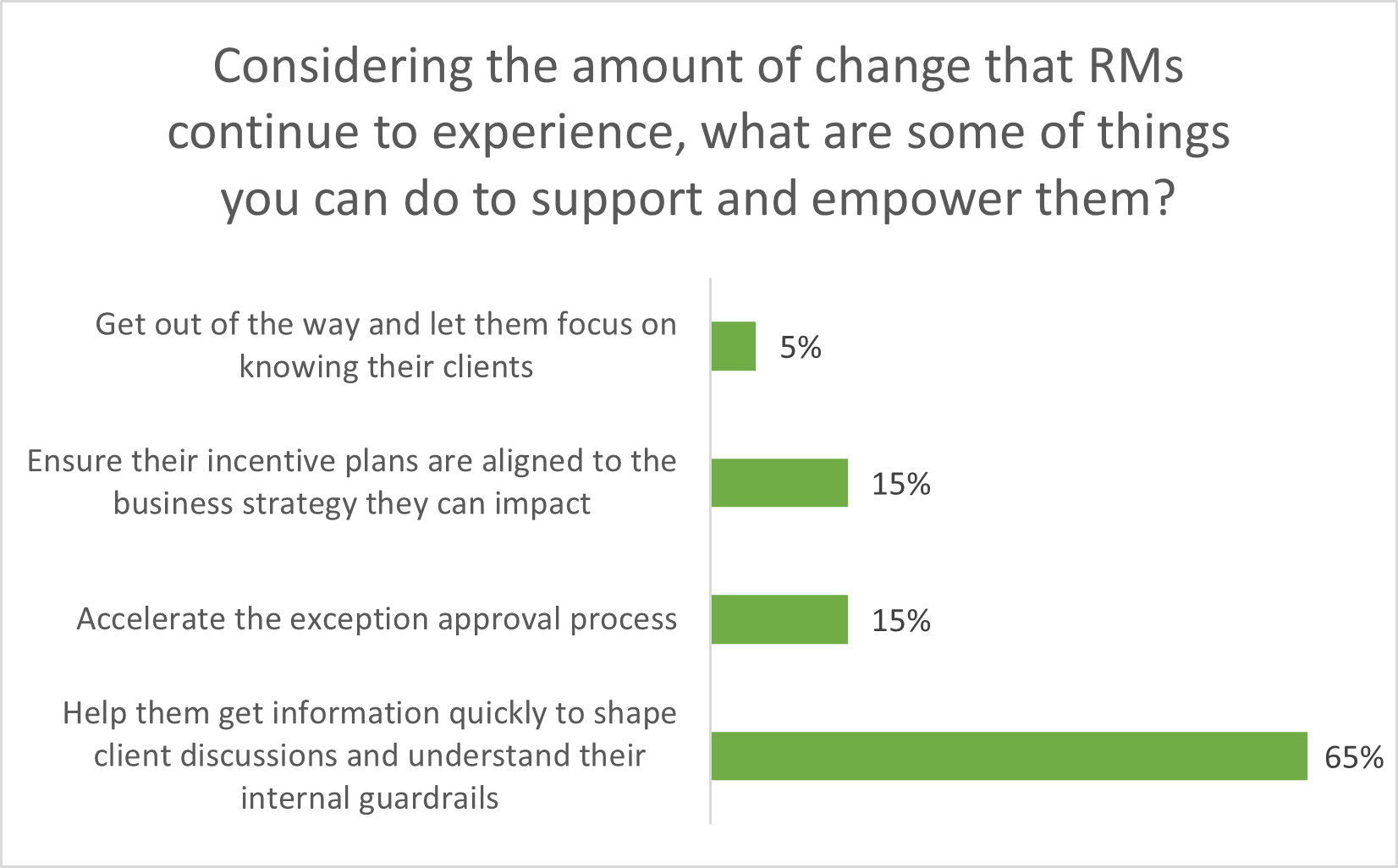 Supporting RMs with technology may first require overcoming some well-founded skepticism, according to Scislowicz. He pointed out that many previous sales tools for RMs were more about “tracking and compliance,” and thus were seen by RMs as something they “had to use” at the minimal level to get credit for their deals. In other words, tools focused on manager oversight and not on RM empowerment.
“What we're trying to do is to shift that narrative,” he said. “To say, ‘How do we get to actionable insights that make you want to use the sales tools that are available to you.”

Snowden also pointed out that tech can help RMs by taking some of the mundane  aspects of their jobs off their plate, thus freeing them up to focus on the work where they can really add value.

As for the availability of timely information – the response the majority of respondents chose in the poll – Wells said the insights don’t always have to be produced by sophisticated data analytics.

“We find it’s actually the simple heuristics, like simple “if thens” that banks struggle to do at scale. Like, ‘If you see a customer that only has loans, and no deposits or fee-based business, then ask them for that business. And flag that for the banker. Simple stuff.”

Here's more on that conversation: 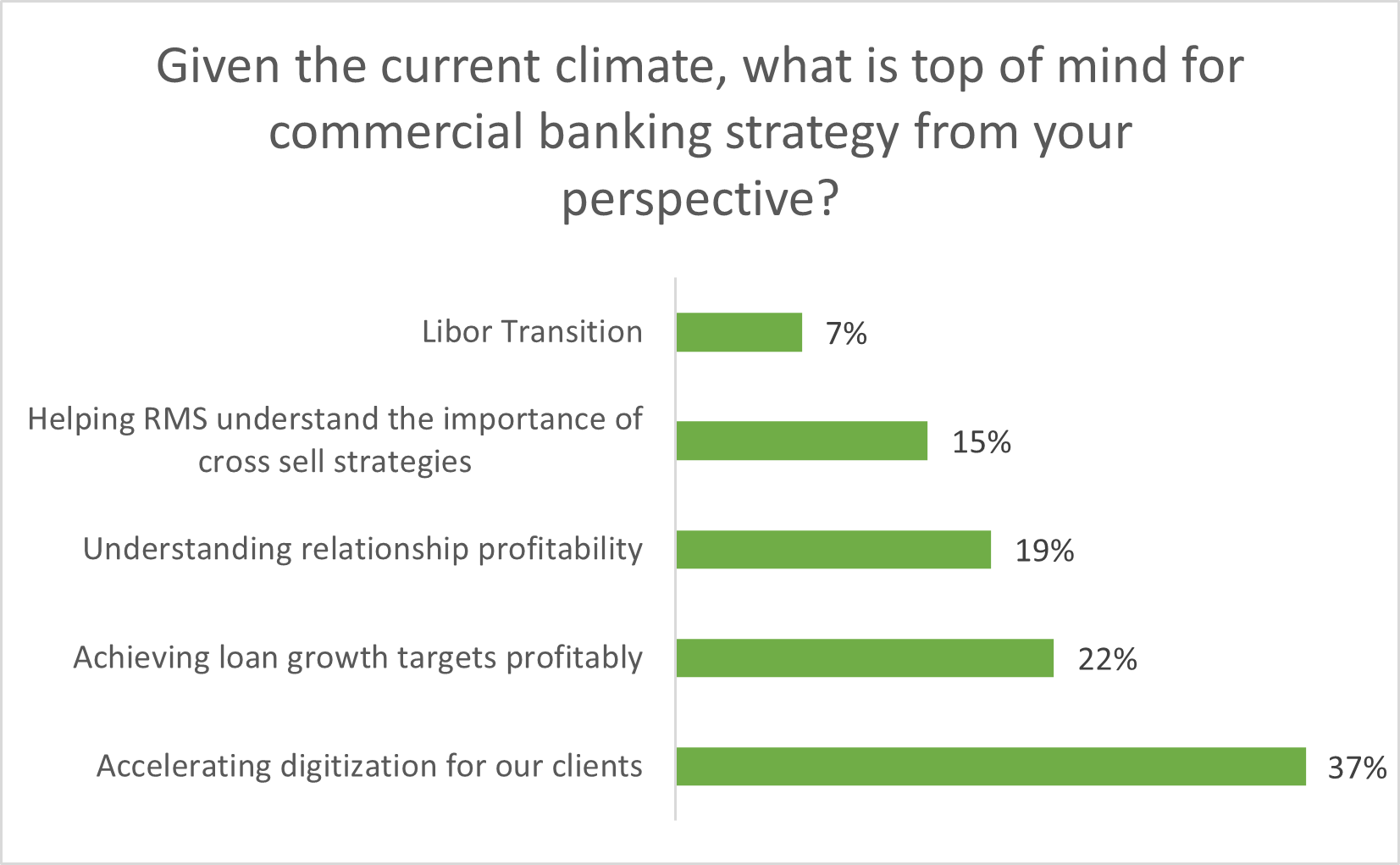 Scislowicz was not surprised that accelerating digitization was top of mind for the most poll respondents. Not after what unfolded in 2020.

“(2020) was the kick in the pants that a lot of institutions needed to really turbo charge their digital investment,” he said. “It showed the risk of not investing in digitization, in digital enablement and communication … We’ve seen a tremendous amount of work in that area.”

But Wells wondered if the transition off LIBOR that looms at the end of 2021 should be getting more focus from bankers. He expressed concern about whether front-line bankers would get the training they needed in advance of the transition.
“I think you’re going to have lot of human error, people choosing the wrong index for the wrong kind of deal, and the wrong funding sources being plugged through as they measure it.
“And then, more importantly, are your bankers ready to have those conversations with their customers? …  There's just a lot of behavioral change that needs to be dealt with that I don't think the industry is ready for.”

Wells noted that LIBOR transition got the fewest responses in the poll, but predicted that by the end of 2021 it would be “Number one with a bullet.”

Snowden agreed that banks need to set aside time to explain the “why” of the LIBOR transitions and to give their bankers “time to take it all in.”

“Don’t just tell them in November: ‘This is changing, go out and talk to all of your clients.’” 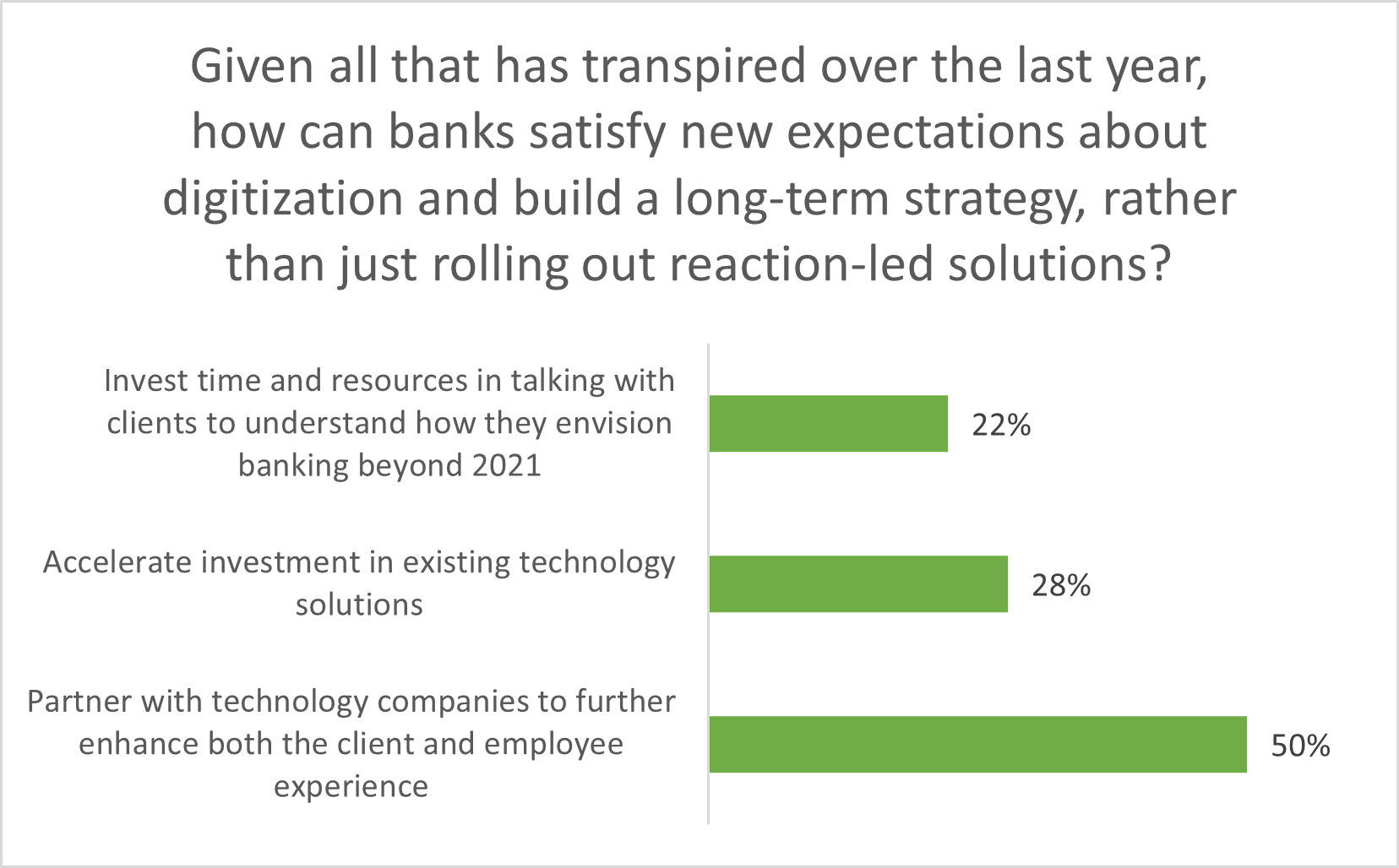 The fact that “partnering with technology companies” was the leading choice in this poll represents a changing perspective from banks on the issue of digitization.

“It’s been a journey at Scotia,” Snowden admitted. “We were probably one of the banks several years ago that would have said, ‘Let’s just build this.’ And our IT teams would have taken the lead.

“And it’s true. If you have enough time and you have enough energy and resources you can build anything. The problem is it's not going to be as effective as going out and bringing in top of the line best in breed solutions.”

Still, that shift in philosophy hasn’t spread throughout the entire industry at this point.  And, as Wells noted, it’s required that banks learn how to buy new technologies, vet new vendors, and then ensure that technology plugs in at the right spot in their bank.

“We've seen some banks have to have brawls with their own IT departments,” he said.

Banks must also consider, as they build out their tech stacks, how to create a “seamless experience,” from one piece of technology to the next, Scislowicz added.

“We’re now moving forward into the user experience side. Not just for the client, but also for the employee.

“Now that we have the infrastructure that enables us to connect the systems, how do we start to connect them and drive that seamless user behavior, both internally and externally?”

Here's more from Snowden on the concept of "Buy vs. Build" 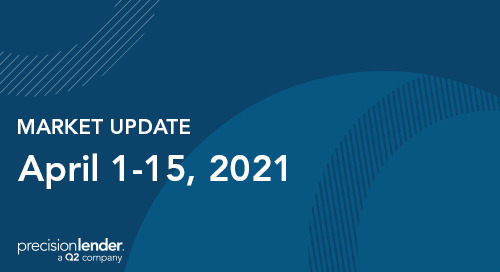 A look at what PrecisionLender data tells us about the commercial loan pricing market, for the first half o... 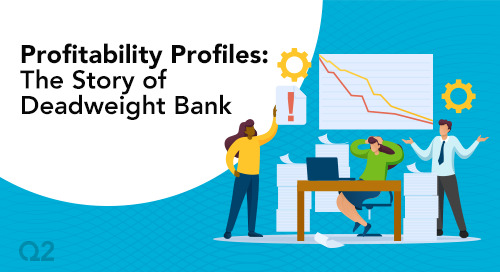 Part one of our series on relationship profitability at selected banks. This piece looks at Deadweight Bank...