In today’s analysis, for the month of September, we took a look at SOFR coupons and spreads vs. LIBOR, as well as yield trends in 2021.

While pricing volume continues to be well above what we saw earlier this year, August marked the fourth straight month in which the levels were in a more narrow track, ~ 40-50% above January. The overall average for 2021 is now 31% higher than January’s volume priced.

After posting our first data findings about SOFR in the August Update, we saw an uptick in pricing using the index in September. Still only 11% of our client banks are using SOFR so far and LIBOR pricing quantity is still 10x SOFR. So please tread carefully about drawing any conclusions from these early observations. 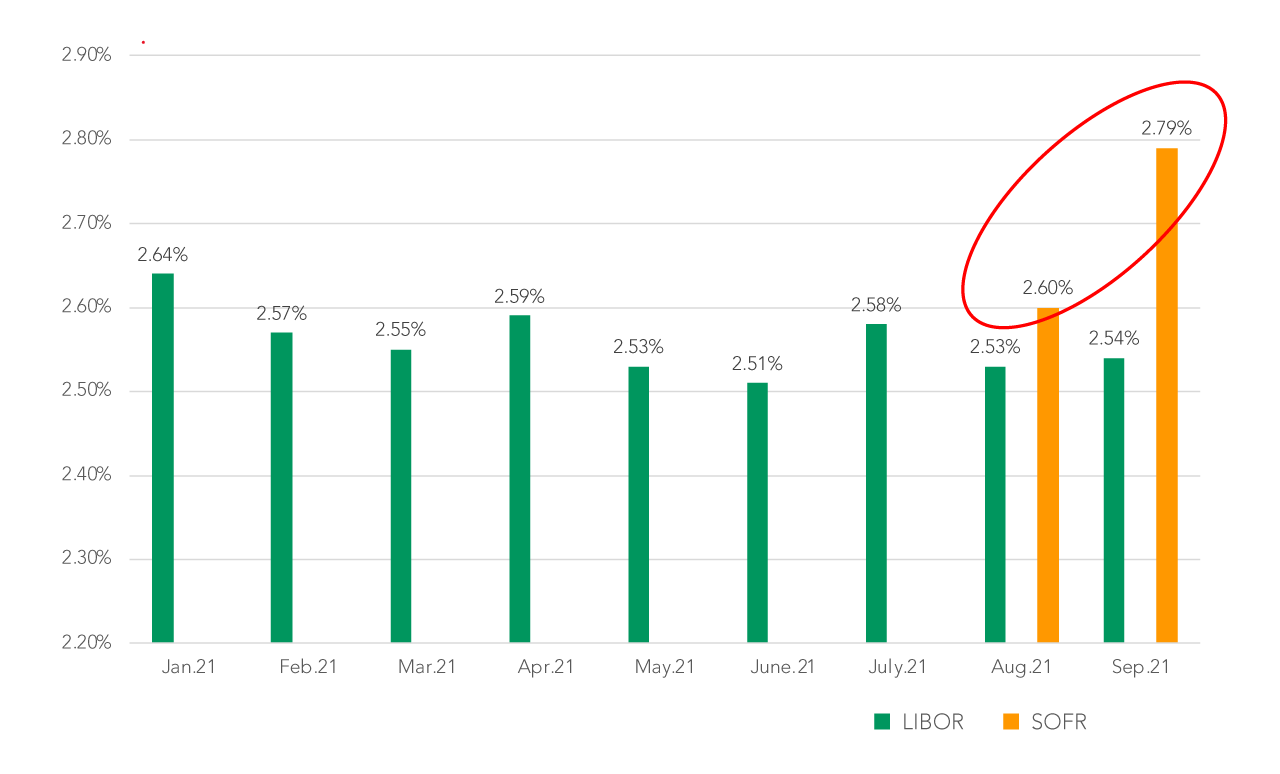 Anecdotally, this 19-bps increase in SOFR spread from August – and the 25 bps gap between SOFR and LIBOR spreads this month – does mesh with what we’ve been hearing during our conversations with bank management. They’ve told their bankers to not simply accept the same prices for SOFR-based loans as they had for ones priced off LIBOR (even though the LIBOR rate index is ~4 bps higher than SOFR).

Those directives appear to have been heeded, at least initially, as the average SOFR coupon was 21 bps higher than its LIBOR counterpart in September. 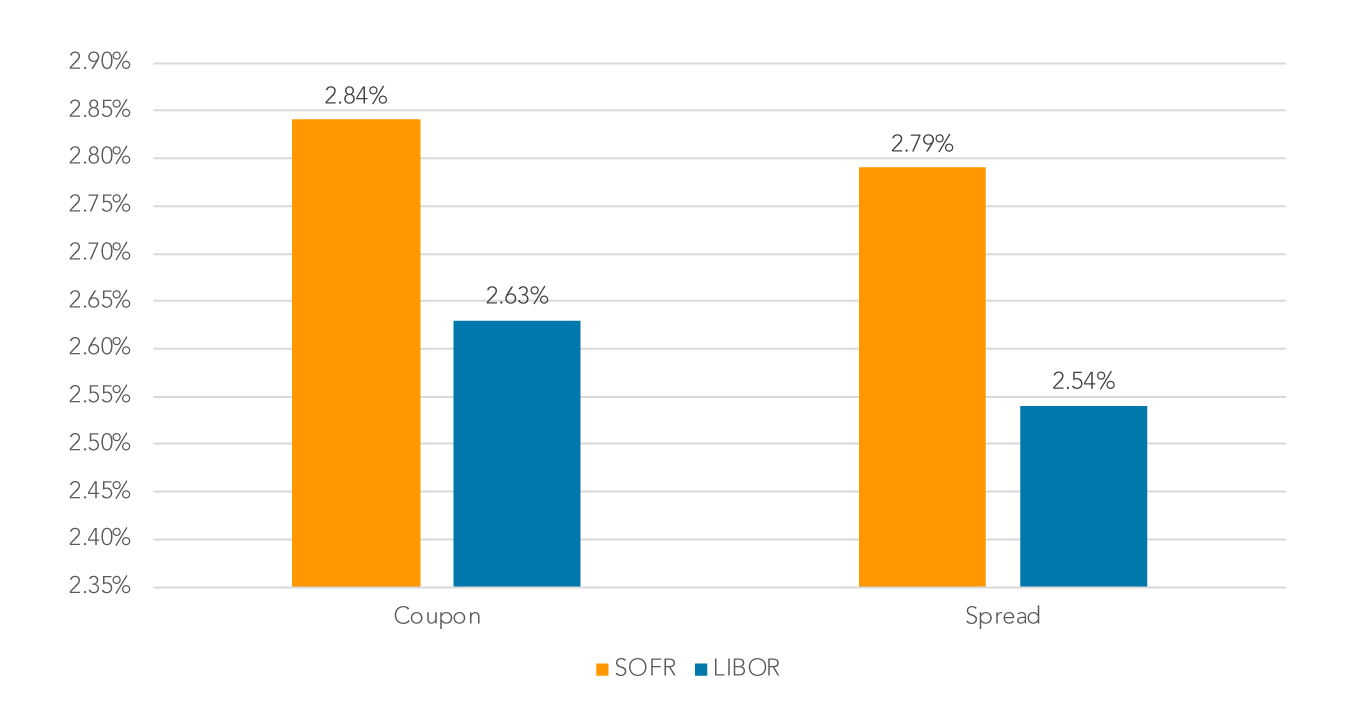 Other data to note:

After little movement for most of the month, there was a sudden spike in the 3-Month LIBOR Swap Curve (our proxy for fixed-rate funding costs) at the end of the month. Is it just an end of quarter spike? Is it an early reaction to rumbling of an upcoming Fed tightening? We’ll have to keep checking the curve in October to know for certain.

While Sept. 30 snapshot showed the 60-month and 120-month maturities as ~20 bps higher than the Aug. 28 snapshot, it should be noticed that overall fixed-rate funding costs were up only 3 bps, month-over-month. 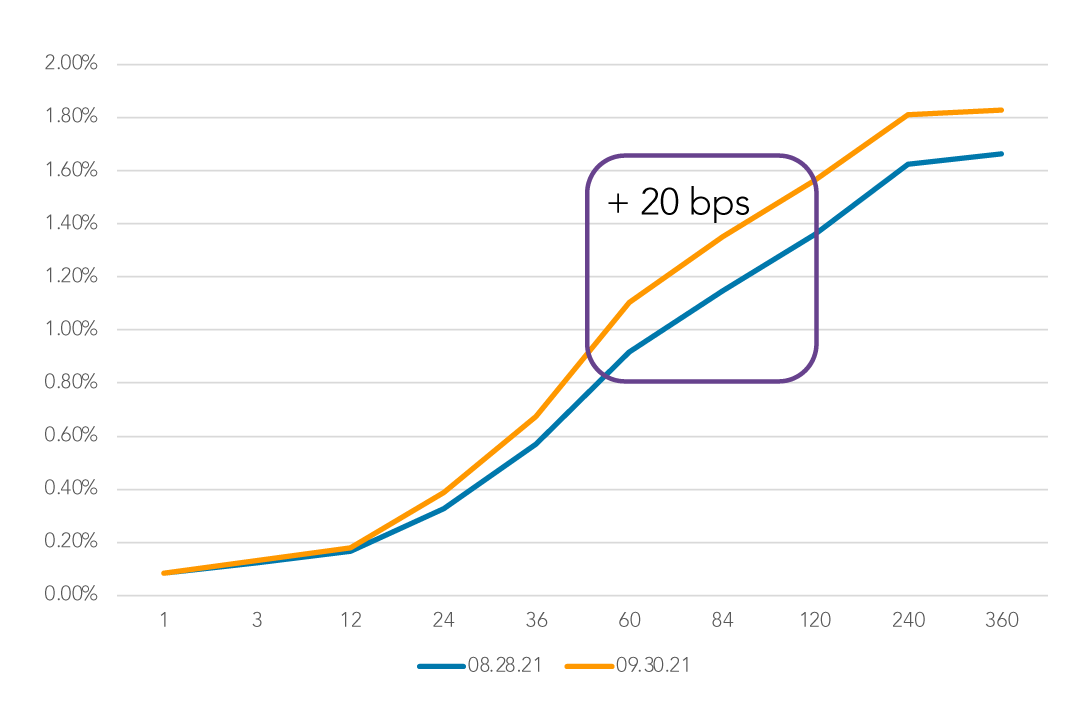 While fixed-rate funding costs inched slightly upward and fixed-rate spreads continued to narrow (down to 2.57% the lowest since we started tracking them in January 2021), Prime- and LIBOR-based floating rate loans have had nearly static funding costs and a narrow range of spreads over the past three months.

So we opted to look at things from a different angle this month, charting Yield trends for all three loan types over the course of 2021. 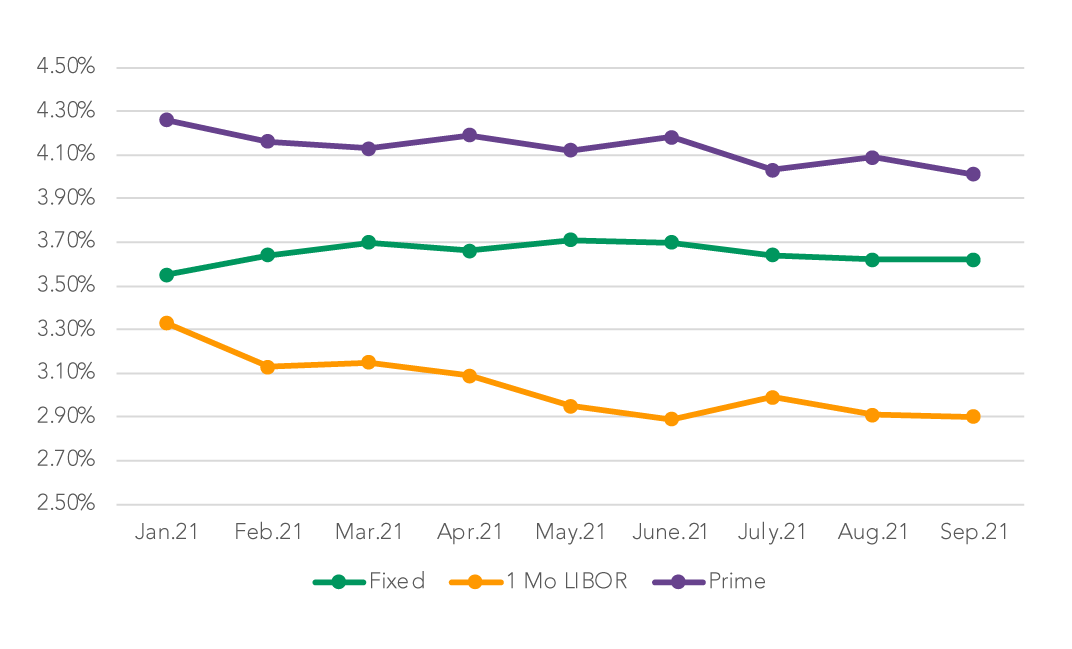 After a drop early in 2021, Prime yield have remained in a more narrow, 12 bps range since March. Overall, Prime yields are down 25 bps since January.

Meanwhile, fixed-rate yields are actually up 7 bps for the year, rising to a peak of 3.71% in May before falling back down to 3.62% in September.

The trend that caught our eye though, is what’s happened to LIBOR yields. They have steadily dropped since January and are down 43 bps, to 2.90% so far in 2021. Given that, as we noted above, funding costs have remained steady on these loans and spreads have stayed in a 10 bps range this year, the drop can be attributed to a relative reduction in net fee income on LIBOR loans priced in 2021.